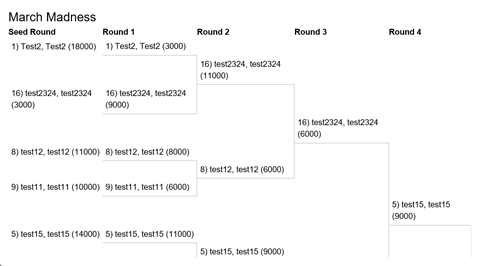 A typical fitness challenge consists of various activities with distinct start and end dates. The person or team who accumulates the most points by performing these activities wins the challenge. While there is nothing at all wrong with this type of challenge and it constitutes most of the challenges we host, there is also something to be said for mixing things up every once in a while to keep your program fresh. Enter the Point-based and single-elimination tournament challenges.

Single-elimination tournament challenges offers a format that most participants will recognize. With a single-elimination tournament, all participants or teams spend the first (seed) round competing to be included in the actual challenge and be placed in their "seed" according to how they finish in the standings. The participant with the most points becomes the first seed, the participant with the second most points becomes the second seeds and so on until all of the seeds are filled. If more participants enroll than there are available seeds, those with the fewest points are excluded from the tournament.
After the seed round, the actual competition starts. During the tournament, the higher seeds compete one-on-one with the lower seeds in individual challenges. The winner of each head-to-head challenge advances in the tournament while the loser is eliminated. This process continues until only two participants remain. In order to create a tournament challenge, perform the following: